The DeLorean DMC-12 (commonly referred to simply as The DeLorean as it was the only model ever produced by the company) is a sports car manufactured by John DeLorean's DeLorean Motor Company for the American market in 1981–82. Featuring gull-wing doors with a fiberglass "underbody", to which non-structural brushed stainless steel panels are affixed, the car became iconic for its appearance as a modified time machine in the Back to the Future film trilogy.

The DeLorean time machine was Doctor Emmett Brown's most successful invention, a plutonium-powered time machine comprised of a DeLorean DMC-12 sports car that had to reach 88 miles per hour in order to time travel. On November 5, 1955, Doc slipped on his toilet while hanging a clock in his bathroom. When he came to, he had a vision of the flux capacitor in his head. It was constructed afterward and completed in 1985.

Around his 30th birthday, James Halliday bought and restored one of the original DeLoreans used in the Back to the Future films.

Parzival as well came to acquire one, however his existed only in the OASIS. He obtained it by completing a Back to the Future quest on Planet Zemeckis. The DeLorean came outfitted with a (nonfunctioning) flux capacitor, and several additions to its equipment and appearance. First, he'd installed an artificially intelligent onboard computer named KITT (purchased in an online auction) into the dashboard, along with a matching red Knight Rider scanner just above the DeLorean's grill. He also outfitted the car with an oscillation overthruster, a device that allowed it to travel through solid matter. Finally, to complete the ’80s super-vehicle theme, he slapped a Ghostbusters logo on each of the DeLorean's gullwing doors, and added personalized plates that read 'Ecto-88'.

Parzival owns a Back to the Future II hover-conversion DeLorean time machine, with a Knight Rider KITT scanner in the front grill and a 'PARZIVAL' vanity plate. While this is most likely not meant to fly, it can convert to hover mode, which lowers the entire chassis and allowing clearance of obstacles too low for the average vehicle.

After finding a clue on how to beat the first challenge, Parzival once again enters the race in his DeLorean. This time, following the clue he found, he races the vehicle backwards through a hidden tunnel, allowing Parzival to cross the finish line safely and get the Copper Key.

During the final battle, Parzival uses the DeLorean to race through the battlefield to get to Castle Anorak, keeping his wing door open and firing out of it. Soon into the battle, Art3mis, disguised as one of the Sixers, crashes through the windshield and joins him, both firing their weapons out of the open doors, aided by weapons thrown to them by other players. The DeLorean makes it most of the way to the castle, but is wrecked when Nolan Sorrento hits the vehicle with Mechagodzilla's tail, forcing them to continue on foot.

Parzival and his DeLorean time machine.

The car gets wrecked by Sorrento's Mechagodzilla. 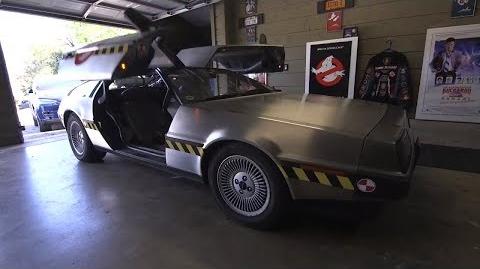