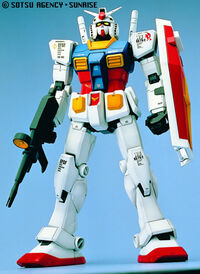 The Gundam Series debuted in 1979 is a metaseries of anime created by Sunrise studios that features giant robots (or "mecha") called "Mobile Suits" (MS) usually controlled by a pilot; Gundam is a type of advanced, high-performance mobile suit often piloted by the protagonists in the series.

The Gundam shown in the film is the RX-78-2, developed by the Earth Federation during the one-year war against the Principality of Zeon. The RX-78-2's pilot and the protagonist in Mobile Suit Gundam is Amuro Ray, a 16-year-old teenager.

During the final battle, Daito uses the Gregarious 120 artifact to turn into the RX-78-2 for two minutes in order to fight Nolan Sorrento's Mechagodzilla. As Gundam, Daito saves Parzival and Art3mis from being crushed and damages Mechagodzilla. However, when Daito's time limit runs out he reverts into himself and is zeroed out by Mechagodzilla (though not before declaring "First to the Egg!" and flipping off Sorrento).

Retrieved from "https://readyplayerone.fandom.com/wiki/Gundam?oldid=21368"
Community content is available under CC-BY-SA unless otherwise noted.