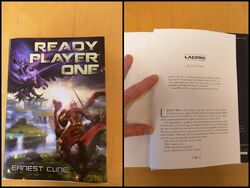 Lacero is a short story about Nolan Sorrento set within the OASIS universe, written by Andy Weir—the bestselling author of The Martian. Originally written as a fanfiction, the author published it online for all fans to see. However, Ernest Cline read the fanfiction and decided that the work would officially become "canon" and included at the end of the Subterranean Press version.[1]

The story tells an origin tale of Nolan Sorrento and why he decided to join IOI. It can be read online on Galactanet.