The Mach 5 (also spelled as the Mach Five) is the star vehicle in the 60's anime Speed Racer.

The Mach 5 has a pointed design, with three points at the front, with no hood, two small, pointy spoilers at the back, and large number fives imprinted on it's sides.

It is completely white in color, with a large red colored M on it's hood. The version seen in Ready Player One (the movie) has a long, orange line on it's body, with colors of light grey and dark grey, with no pointed front and a large number five is imprinted at the back of it's body.

Role in Ready Player One

The car is seen at the racetrack, right behind the A-Team Van, where it is able to compete well, to the point where it passed the bridge jump, and almost collided with Parzival's DeLorean. It comes back again in the re-race, but also becomes the main vehicle of Daito in the film. 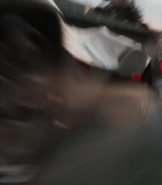 Add a photo to this gallery
Retrieved from "https://readyplayerone.fandom.com/wiki/Mach_5?oldid=21631"
Community content is available under CC-BY-SA unless otherwise noted.