Ready Player One Wiki
Register
Don't have an account?
Sign In
Advertisement
in: Vehicles, Movies, References,
and 3 more

The V8 Interceptor, also known as a Pursuit Special, is the famous car piloted by Max Rockatansky in the late 70's-80's dystopian film series Mad Max. It is known for being a fast car, and having a famous black coloring.

The V8 Interceptor is based of a 1973 Ford Falcon XB GT hardtop coupe, and has a black coloration, with a V8 engine attached on the hood, increasing the car horsepower and performance when turned on from the electromagnetic clutch (which realistically, would blow out an engine)), with an air dam and headlight covers, and two spoiler thrusters in the back of the car and roof. Also equipped with off road tires. In the Mad Max films, it is matte black, with gloss black highlights.

Role in Ready Player One

The V8 Interceptor is one of the vehicles seen in the Copper Key race, having it's driver shortly entering it when Parzival comes to the race's stadium, who waits until the race starts. The Interceptor is on the fifth row, stationed two cars away from the Mach 5. When the race starts, the Interceptor gets bumped by an IOI car, but assumes a steady position while racing. The Interceptor passed the train who collided with an IOI car. The Interceptor raced alongside Christine, when the two successfully jumped over the Hot-Wheels-like ramps, into the New York streets, presumably both passing the Pork Chop Express who soon stopped in the middle of the street, acting as an obstacle.

The V8 Interceptor made it to the wrecking ball stage of the race, who was an unlucky victim of the wrecking balls, being bashed from the back, spinning until hitting a building and rolling on it's top and bottom, until landing back on it's wheels, presumably stopping, since it has become damaged.

It appeared again in the re-race of the challenge, where it performed quite well and better, as it actually passed through the ramps again, and eventually passed the wrecking balls, and the gaping jaws of the T-Rex, but the Interceptor failed to pass King Kong, as it was piled up in a slowing IOI car, collecting a small number of cars, before all of them got ultimately crushed by the fists of Kong.

It's owner, would later appear in the Battle of Castle Anorak. 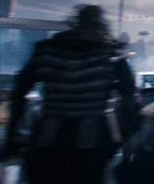 One of these unknown avatars, possibly made for the movie, is the owner of the V8 Interceptor.

The Interceptor, ready to race.

The avatar entering the Interceptor.

The Interceptor, seen in the back, obscured by IOI soldiers.

The Interceptor and Christine about to jump off the ramps.

The Interceptor and Christine jumping.

The Interceptor after being bashed by one of the wrecking balls.